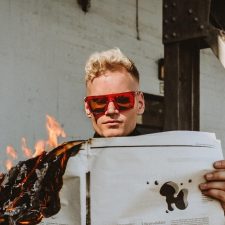 Swedish recording artist Alex Alexander is wrapping up a few good years out of Europe with a target on the USA for 2020 with a little help from former Matchbox Twenty guitarist Adam Gaynor and Gene Simmons daughter Sophie Simmons.

Adam Gaynor discovered the Swedish pop star and saw international protentional. Adam tells Noise11.com, “He was in Europe, I wanted to make it more global. Bigger songs, bigger hooks, crush it with him because I know he has the potential and more”.

“Alex was a writing partner of a musician friend. I realized this kid was not only a very humble and compassionate person about his art but he had so much untapped talent and had already succeeded on his own on Spotify that that I wanted to take the foundation he built and make it even more global what he started.

Working with Adam Gaynor and Sophie Simmons fuelled the creativity for Alex. “When I meet Adam and we started to work on the collaboration song together with Sophie Simmons I got very inspired by the detailed thought process that he uses when working on a song. Having Adam as a mentor in Songwriting and Music Business is going to be a major highlight and improvement to my artist and songwriting career. I love to set my goals unreasonably high and I can’t wait to grow my career together with Adam in Los Angeles 2020 and beyond”.

As an Indie artist Alex has had over 18 million Spotify streams in 2018 and is generating around 88,000 listeners per month of Spotify in the USA.

‘Everything With You’ is his most popular song on Spotify, with over 24 million generated.

“Working with Sophie was really cool and I really have to praise her for her exceptional songwriting skills,” Alex says. “We only got together a couple of hours in a studio complex up in North Hollywood but it was all that was needed to write the song ”Starry Night” that I think will be a big track for me in 2020. I been doing a ton of sessions all over the world as a songwriter and musician and its always very inspiring to work with a talent like Sophie that is also a great artist and singer”.

According to Adam the songs are there. Its now time to build on them. “Bigger songs, bigger hooks, crush it with him because I know he has the potential and more. I am looking forward to getting him here in the States this year. We have a big year planned for 2020 in the States”.

Country singer Jade Holland had to use technology to complete her latest song ‘Do It Right’.