America Are Coming To Australia - Noise11.com 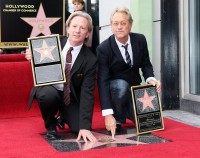 America getting their star on the Hollywood Walk Of Fame

America Are Coming To Australia

Folk icons America are on their way Down Under for a national tour with Rick Price.

America getting their star on the Hollywood Walk Of Fame

‘A Horse With No Name’ – that’s the smooth ‘70s folk sounds of America, and Gerry Beckley and Dewey Bunnell are about to bring their soothing sounds to venues all around the nation.

The Grammy-winning legends were gods in the ‘70s, but continued releasing albums through the ‘80s, ‘90s, and even released a reunion album in 2007 Here & Now. They recently got a star on the Hollywood Walk Of Fame, as per the pic there.

They’ll be joined by local hero Rick Price across the entire tour.

Tickets are available now from Ticketmaster for Melbourne, Ticketek for Sydney and Wollongong, TixTas for Hobart, BOCSTicketing for Perth, and the venues.

Sir Paul McCartney has spoken up for global demonstrators who around the world are calling for the end of racism.

Randy Newman has canceled his Australia and New Zealand tour due to start in just a few weeks.

California's legendary Coachella festival turns 21 this year and to celebrate there is a doco on the way.

Glastonbury's 50th anniversary just got even bigger with one of the world's biggest superstars - Taylor Swift - joining the party.

America Put Up A Powerful Performance For 50th Anniversary Tour

America’s 50th anniversary has given Gerry Beckley and Dewey Bunnell an adrenaline rush for this tour.