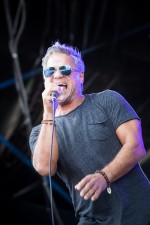 Australian based singer songwriter Jon Stevens will perform an intimate showcase in Nashville in coming weeks with Dave Stewart.

Stewart will be launching his book ‘Sweet Dreams (Are Made Of This) in conversation with Martina McBride in Nashville on February 27. Stevens is expected to head to Nashville after for upcoming live commitments in Melbourne and Warrigal next week before returning to resume the Red Hot Summer tour with Noiseworks near Brisbane on March 5.

‘Sweet Dreams (Are Made Of This)’ is the biography of Dave Stewart from his time growing up in northern England, to meeting a waitress named Annie and forming a band called The Tourists that breaks up in Wagga, NSW and then starting another band with Annie called Eurythmics.

The entrepreneur Stewart and his Weapons of Mass Entertainment company has been behind numerous projects and businesses in music, film, television, books, theatre and new media.

One of Stewart’s upcoming projects is a comedy starring Reba McEntire and Lily Tomlin.

Martina McBride, who sang ‘Every Single Night’ on Dave Stewart’s ‘Lucky Numbers’ album will be asking the questions in Nashville on February 27 from 6pm at the launch.

Dave Stewart will also perform with Chad Cromwell, Dan Dugmore, Tom Bukovac and Mike Rojas at The Basement East in Nashville on March 2, 2016.

Eurythmics Perform For The Rainforests

Annie Lennox and Dave Stewart were Eurythmics once again on Monday night for a three-song set for The Rainforest Fund.

Vanessa Amorosi has just finished up touring for Duane McDonald’s Red Hot Summer and had the time of her life being back in Australia and on the road with people she considers her music family.

Complete Nightmare and the Cat performance uploaded to YouTube

A complete performance by UK/American band Nightmare and the Cat, filmed at The Roxy in West Hollywood in 2014, has been uploaded to YouTube.

Gabriele Susanne Kerner, AKA Nena and Dave Stewart have a brand new song together titled 'Be My Rebel'.

Jon Stevens has spared no expense for his upcoming album ‘Starlight’ with a Hollywood-sized video for the first single ‘Hold On’.

Jon Stevens has been working with Dave Stewart and the result is quite stunning.