Peter Frampton Has A Story About Being Saved By David Bowie - Noise11.com 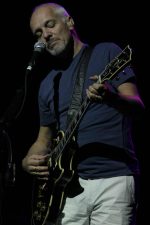 Peter Frampton Has A Story About Being Saved By David Bowie

Frampton played on Bowie’s 1987 ‘Glass Spider’ world tour – for which Frampton played guitar – David noticed smoke coming out of a vent from their private plane just before take-off and he carried Peter off the plane to safety.

He told The Sunday Mirror newspaper: “On that tour we had private planes, and on one flight smoke started coming out of the vents.

“Dave stands up and goes, ‘Smoke! Smoke!’ So the pilot stops and the flight attendant pulls the back stairway down.

“I’m in my seat and Dave literally lifts me out of my seat and carries me down the chute. I’ll never forget that.

“He could have run out, but he wanted to make sure I was OK. That was the kind of guy he was with me, and in general. He was a lovely man.”

Peter and David first met at school in Bromley, South East London, when they were just teenagers and Peter praised his pal for choosing him as a touring musician for him after he fell on hard times.

Writing in his upcoming memoir, he said: “David saw I’d become this fallen pop idol. So what could he do for me? Take me around the world and reintroduce me as a musician.”

David passed away in 2016 at the age of 69 after a secret battle with cancer and Peter paid a touching tribute to him at the time.

He said: “I am in shock hearing this news about David. He was a dear friend and mentor to me. He gave me help when I most needed it. My thoughts are with his wife and children on this very sad day.”

The Stooges’ James Williamson and Radio Birdman’s Deniz Tek will release an album together this week.

Warning: A David Bowie Clip If You Watch You Can Never Unsee

In 1975 David Bowie appeared on The Cher Show. Somehow Cher talked Bowie into butchering his current hit ‘Young Americans’ by slicing it open like a hamburger bun and filling it with schmaltz.

Song from a 1995 David Bowie concert from Dallas’ Starplex Amphitheater will be released this coming Friday.

Neil Finn’s latest At Home episode is a cover of Prince’s ‘When Doves Cry’.

A video for David Bowie’s 1997 track ‘Repetition’ has been released for the first time.

Neil Finn has performed a cover of the David Bowie classic ‘Heroes’ at his house in New Zealand.

The Estate of David Bowie has slipped another nugget out to fans. ‘Baby Universal 97’ is a re-recording of Bowie’s 1991 Tin Machine II track.