The Tea Party To Return To Australia Next Month - Noise11.com 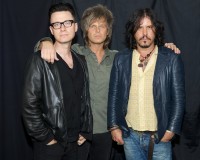 The Tea Party To Return To Australia Next Month

The Tea Party will be back in Australia for some intimate gigs in Sydney, Melbourne and Brisbane in March.

After getting back together in 2010 after 8 years, The Tea Party did the full-on rock show tour around Australia last year.

This Australian trip is to record their first studio album since 2004’s ‘Seven Circles’. It also coincides with the 20th anniversary of their first album ‘Splendor Solis’.

There will be strictly only three shows on this tour.

Alanis Morissette has a new video for ‘Reasons I Drink’, another taster from her upcoming ninth studio album ‘Such Pretty Forks In The Road’.

Sydney-born, US-based singer Alex Cameron is heading to Australia and New Zealand for a whirlwind tour.

Quirky comedian Russell Brand has announced his return to Australia in February and March next year.

No points for guessing the influences of Kadavar here. Fans of Black Sabbath and Kyuss might want to pay attention because the Berlin-based rockers are heading to Australia and New Zealand.

Former Oasis front man Liam Gallagher has announced a bunch of acts who will warm up audiences around the country for him.

The Pixies are the band's band. While their album sales have been eclipsed by bigger names, their influence has arguably outshone every one of their peers. Now they're bringing Australia's buzz bands along for the ride.