Tom Morello Says Rage Against The Machine Killing In The Name was Originally an Instrumental - Noise11.com 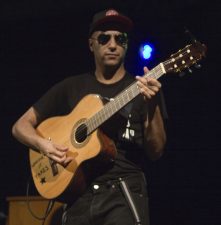 Tom Morello of Rage Against The Machine has opened up in depth about the political rock group’s iconic track, and how the band – completed by Tim Commerford, Zack de la Rocha and Brad Wilk – brought the track together after he first came up up with the riff while teaching a guitar lesson.

Speaking on the ‘Rolling Stone Music Now’ podcast, he said: “It was originally an instrumental.

“There’s a Rage Against the Machine video from Cal State Northridge – which is our first public performance – where we open the show with an instrumental version of ‘Killing in the Name’ and Timmy [Commerford], I think, came up with that really cool [bass riff].

“[Brad Wilk’s] crowd-bouncing beat is there from the very, very beginning. And then Zack laced it with the historic lyrics.”

The hard rockers originally left the powerful lyrics out of the liner notes for their self-titled 1992 debut album to give them more of an impact when fans heard the words for the first time.

He explained: “We actually left the lyrics off of the lyric sheet of the first record, because it’s I think it’s two lines, 16 ‘fuck yous,’ and one ‘motherfucker.’ “And we’re like, in the midst of all this grand political poetry, let’s just that one stand for itself.”

Despite the lyrical simplicity of the main breakdown in the defiant anthem, Tom suggested the enduring “sentiment” makes it one of frontman Zack’s best lines.

He added: “‘Fuck you, I won’t do what you tell me’ is a universal sentiment. While it’s a simple lyric, I think it’s one of [Zack de la Rocha’s] most brilliant.”