John Farnham Kicks Off His Summer Season For One Electric Day - Noise11.com 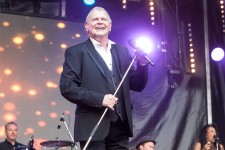 John Farnham Kicks Off His Summer Season For One Electric Day

John Farnham resumed work for the summer of 2019 for One Electric Day on a not so summer’s day in Launceston on Saturday.

The fun thing with Farnham heading back on the road is the usual “he said he was retiring” (which he never did) banter that is aligned with every new show announcement and true to form, social media posts have been popping up with the whining.

One Electric Day has gone national for 2019 with shows to come for Sydney, Melbourne, Brisbane and the Barossa Valley over coming weeks.

These One Electric Day shows feature the return of Southern Sons playing their first shows in nearly 20 years, Vanessa Amorosi, Jon Stevens and James Reyne as well as John Farnham.

Southern Sons first hit was ‘Heart In Danger’ in 1990.

Vanessa Amorosi’s shows coincide with her new album ‘Back To Love’, out Friday 8 November.

John Farnham was expected to release a new album during 2019. It didn’t happen. Farnham’s last studio album (not counting the Christmas album) was ‘Jack’ in 2010.

Get tickets for One Electric Day here

John will also headline the Hay Mate charity concert for farmers at Mornington on 15 December 2019.