Ghost The Musical Is One Of The Best Theatre Shows To Hit Melbourne - Noise11.com 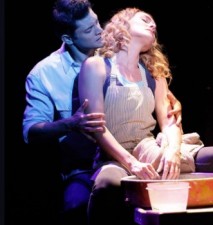 Rob Mills and Jemma Rixx in Ghost The Musical

Taking a classic Hollywood tear-jerker and transforming it into a musical may sound like an insane idea but Ghost The Musical really does work.

Casting is key and the choice of Rob Mills as Sam Wheat and Jemma Rix as Molly Jensen are perfect. Mills and Rix could carry off this show on any stage in the world. Without a doubt Millsy has become Australia’s leading star of stage. With that Australian Idol year now well in the past Rob Mills has transformed on stage to the point of owning each show that he stars in. ‘’Wicked’, ‘Grease’, ‘Legally Blonde’ and ample other shows along the way have given Rob the path to now be truly called ‘a Star”. He has the ability to attract a new generation to theatre and get a new audience excited about live performance.

A special mention needs to go to Wendy Mae Brown (is that REALLY your real name Wendy?) who plays Oda Mae Brown, the psychic character played by Whoopi Goldberg in the movie. Wendy brings the authenticity of the movie to the stage. ‘Ghost’ has a very dark storyline. Without the Oda Mae Brown character, ‘Ghost’ would be just another murder mystery. Oda Mae is the vessel not only for the dead to speak with the living but also that bridge for the audience to connect spirituality with humour.

The other two stars of the show who are very much in the background are Dave Stewart (Eurythmics) and Glenn Ballard (producer co-write Alanis ‘Jagged Little Pill’). Stewart and Ballard wrote the new music that is the glue that brings an iconic Hollywood movie to life (or in Sam’s case … death). The new songs give momentum to the storyline so that through the music the actors can transition the scenes to keep the plot and imagery true to the movie without ever having to break out into inane dance routines (where King Kong fell down).

‘Ghost’ the movie was centred musically around the 1955 classic ‘Unchained Melody’, best know by the 1965 Righteous Brothers version that is used in the movie and stage show. Stewart and Ballard have kept the flavour of the time and expanded their new music for the stage show to fit the late 80s sounds and 1990 release of the original movie. The stage show remains set in New York in the same era circa late 80s complete with landline phones, telephone chords and old computer screens with early computer fonts, again staying true to the original look and feel of the movie.

Eurythmics Perform For The Rainforests

Annie Lennox and Dave Stewart were Eurythmics once again on Monday night for a three-song set for The Rainforest Fund.

Vanessa Amorosi has just finished up touring for Duane McDonald’s Red Hot Summer and had the time of her life being back in Australia and on the road with people she considers her music family.

Complete Nightmare and the Cat performance uploaded to YouTube

A complete performance by UK/American band Nightmare and the Cat, filmed at The Roxy in West Hollywood in 2014, has been uploaded to YouTube.

Gabriele Susanne Kerner, AKA Nena and Dave Stewart have a brand new song together titled 'Be My Rebel'.

Jon Stevens has spared no expense for his upcoming album ‘Starlight’ with a Hollywood-sized video for the first single ‘Hold On’.

Jon Stevens has been working with Dave Stewart and the result is quite stunning.