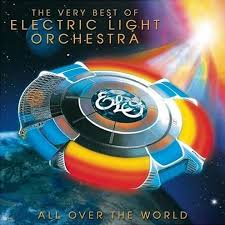 Originally released in 2005, All Over the World: The Very Best of ELO finally makes it to the top after hitting number 6 in its original chart run and spending seven weeks in the top ten after their appearance in the veteran artist spot at this year’s Glastonbury Festival.

All Over the World is also number one on the Album Sales and Physical Album Sales charts. It is also topping the album chart in Scotland.

Also setting a multi-decade best is Legend by Bob Marley and the Wailers which moves from 8 to 7. The last time the album was this high on the British charts was on September 8, 1984 when it was at number 5 coming off its twelve week run at the top of the charts.

Rick Astley’s 50, notches its seventh straight week in the top ten, falling from 9 to 10 while the Red Hot Chili Peppers’ The Getaway falls 14 to 19 in its sixth week. Now, two months ago, who would have predicted that Rick Astley would outperform RHCP?

There is only one new album by a veteran artist in this week’s top 100 and it is at number 100, former Lamb singer Lou Rhodes’ album Theyesandeye.

Behind ELO on this week’s chart is Christine & the Queens with Chaleur Humaine, Views by Drake, Adele’s 25 and A Head Full of Dreams by Coldplay.

Now in release for two years and one week, Guardians of the Galaxy: Awesome Mix, Vol. 1 moves 2 to 1 to retake the top of the Soundtrack Albums chart. In Record Stores, the big seller this week is A Moon Shaped Pool by Radiohead.

In Country, Steven Tyler has duplicated his U.S. success by taking the number 1 album of the week while the Eagles’ Unplugged 1994 is once again the top Country Compilation.

On the Singles chart, Major Lazer (with Justin Bieber and Mo) debuts at number 1 with Cold Water followed by Perfect Strangers by Jonas Blue Featuring JP Cooper, Dancing On My Own by Calum Scott, Don’t Let Me Down by the Chainsmokers Featuring Daya and former chart topper Once Dance by Drake Featuring Wizkid & Kayla.

The highest charting single by a veteran artist is, once again, Can’t Stop the Feeling! by Justin Timberlake which holds at 11. The Stone Roses have the number 1 Physical and Vinyl Single with Beautiful Thing. It’s the second week in a row that the band has held the top spot on both charts with their All For One taking the crowns last week.

Finally, in video, the Rolling Stones’ Totally Stripped is the biggest selling music DVD of the week.

Electric Light Orchestra founder Jeff Lynne believes he has around 2,000 cassette tapes with recordings from his legendary band, which he'd love to listen to again, but he doesn't have a tape player to play them on.

Hugh McDowell, the cellist and early member of Electric Light Orchestra, has died after a long illness at the age of 65.

Celebrating the 40th anniversary of the Electric Light Orchestra's (ELO) top-selling double album, Out of the Blue, Legacy Recordings, the catalog division of Sony Music Entertainment, will release the first-time-ever picture disc edition of the ELO classic available everywhere on Friday, September 29.

A galaxy of stars joined music therapy charity Nordoff Robbins at the O2 Silver Clef Awards at Grosvenor House Hotel in London, to celebrate some of the biggest artists in music.